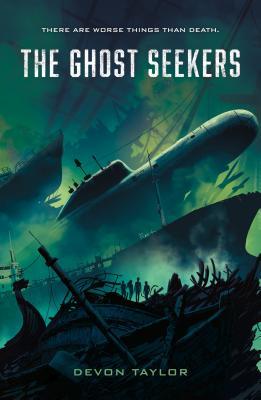 “A fantastic high-stakes adventure on a ghost ship sailing forever into eternity, where every soul is (literally) worth fighting for—what’s not to love?” —Rin Chupeco, author of The Bone Witch and The Girl from the Well, on The Soul Keepers

There are worse things than death.

The Harbinger is lost, sunk to the bottom of an otherworldly sea. Every soul that ever died and was protected within its hold has been lost along with it. But at least that precious cargo is out of reach of the demon Urcena and her army of soul-devouring monsters.

The soul keepers are broken, scattered, and barely clinging to existence without their ship or any way to collect or protect the souls of the newly dead. If they are to have any hope of stopping Urcena’s horrifying plans to destroy the fragile balance between living and dead, they will first have to survive long enough to locate the ghost of one of their own, who sacrificed himself to save the rest of the crew.

Devon Taylor’s cinematic and pulse-pounding duology comes to a thunderous conclusion in The Ghost Seekers.

Devon Taylor was born in Las Vegas, Nevada and currently lives in Pennsylvania with his wife and two daughters. His day job consists of sneaking around the house with ninja-like stealth to avoid waking up his kids. When not writing, reading, or tediously typing out text messages with all the correct spelling and punctuation, he spends his time with his family. THE SOUL KEEPERS is his debut novel.

What authors/books inspired your writing?

When I was a kid in elementary school, I realized I wanted to be a writer while I was sitting on the library floor, reading one of Mary Pope Osborne’s Magic Tree House books. Then as I got older, I definitely continued to gravitate toward those speculative fiction stories that felt like they came out of real life. I read IT when I was twelve and became a huge Stephen King fan. I also grew up with Harry Potter and Artemis Fowl and other series like those, and I continue to read a ton of YA fiction today. Two of my favorite books of the last couple years were The Hazel Wood by Melissa Albert and Long Way Down by Jason Reynolds.

What is your ideal writing setting (outside, at a desk, etc.)?

I can write pretty much anywhere. I technically have a desk with all my fun knick-knacks and nerd paraphernalia decorating it, but I rarely use it to write. Usually, I’m at the dining room table with my laptop and a cup of coffee, in those early hours when everyone’s still asleep and the house is quiet and I can kind of lose myself in the words.

Do you have any writing exercises or habits?

I don’t really have any odd rituals when it comes to writing. I try not to pay attention to word count too much, or to how many hours I’m putting in. As long as I have that little bit of time every morning before my wife and daughters start getting up for the day, I can typically just sit and write without having to stress about it.

How do you deal with writer’s block?

I don’t really believe that writer’s block is an actual thing. I think writers have other things in their lives that inhibit their ability to write, like day jobs or kids or laziness or mental illness or stress or financial problems, pretty much just Life in general can slam the door on a person’s efforts to write. And I think part of that comes from the pressure we put on ourselves to always be writing, even during the tiny fragments of free time we have each day. Victoria Schwab has this thing she always says about how even when you’re not transcribing the words, as long as you’re thinking about your story and working on it in your head, you’re still technically writing. And I love that. I try not to get on my own case about how I “should be writing” even though I only have five minutes to myself on a Thursday afternoon and I really just want to spend it staring at my phone. As long as I still have that story idea in my head and I’m still excited about it, I think the words will come when I need them to and when I’m ready to put them on paper.

Do you have a special connection to any of your characters?

I like to think that all of my characters take a little bit of inspiration if not from myself as a person then at least from other aspects of my life. For instance, one of the characters in The Soul Keepers and The Ghost Seekers, Basil, his whole schtick is being a sarcastic bastard at the absolute wrong moment. And my entire family’s love language is sarcasm, so I drew a lot from my own interactions with my family to help write him as a character.

What is your go-to book that never lets you down?

I usually don’t re-read books, just because my TBR list is already way, way too long as it is. But there are definitely books that I wish I could forget about and read for the first time again. The Dark Tower series by Stephen King, the Harry Potter books, To Kill a Mockingbird, The Road by Cormac McCarthy, just to name a few.

What can we hope to see from you in the future?

I’m working on a new book right now that’s a little more grounded in reality but has a lot of supernatural and sci-fi elements. Hopefully I’ll have more details about that soon.

Any advice for aspiring authors?

Just write. And I don’t mean putting words on paper. I mean writing a story that you not only want to read right now, but the story you needed five or ten or twenty years ago. If writing is your passion, be passionate about it. Immerse yourself in the community of writers, watch interviews, read articles, read books on craft (On Writing by Stephen King and Bird by Bird by Anne Lamott are great ones). Read, read, read, especially books that are in the genre you want to write. And don’t forget to give yourself a break every now and then.