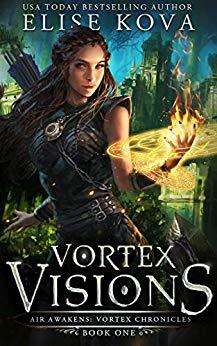 **Disclaimer: I received an Advanced Reader Edition of this book in exchange for an honest review**

For those of you that don’t know, Vortex Visions is the first book in a new series in the same world as its sister series, Air Awakens. If you haven’t read Air Awakens or finished the series, there is bound to be some spoilers in here, but, as the author Elise Kova has openly stated, you don’t have to read Air Awakens before reading Vortex Visions.

Also, my reviews tend to be a bit spoilery, so if you’re not a fan of that I suggest going forward with caution. I do, however, try to keep plot spoilers and big events out so not to ruin the book for anyone.

For this review, I’ve decided to split this into a few categories; plot, world-building, and characters.

Plot:
I picked this book up excited not only because I got to revisit the Solaris Empire, but because I would get to see some of my favourite characters all grown up and meet a whole bunch of new characters to accompany them. Instead, I got a lot of Vi complaining about her life, going to her lessons, and learning a bunch of new stuff that seems completely woven from scratch and not at all like the original series. Perhaps this is what Elise Kova meant when she said you don’t have to read Air Awakens.

Quite honestly, and here’s a spoiler so don’t get mad when I say that the most interesting parts of this book were when Vi had run-ins with death. It’s like with some fantasy series when the characters take long walks to get from place to place except there’s no walking and it is all in the same general area but with a lot of thinking, extremely fake girl gossip, and complaining about how life isn’t all that fair. You’re not 13, Vi, it’s time to grow up a little.

The disease, the White Death, was probably the best plot aspect of the whole book and something I hope to hear more about in future books.

The ending was okay. It was much like I expected given the rest of the novel, but at that point, I reached a point where I didn’t really care about most of the characters involved, which is not great. I think it’ll be a great way to push into book two. A lot of loose ends that make me want to pick up the next book.

World-Building:
Of course, Elise never disappoints with her world-building. I absolutely can’t complain about it. And for those of you that read Air Awakens, were probably surprised about the inclusion of even more world-building in this! I must admit, part of me is very upset that there is a bigger world than what we previously thought. To me, it seems like that just makes the plights of the characters seem less worth it. In other words, why would a bigger kingdom in a bigger part of the world not matter more?

The magic aspect of Air Awakens was one of my favourite parts and by essentially belittling the powers of those in Solaris, it made me sad that Vhalla, who was seemingly so important, doesn’t matter a whole lot in the grand scheme of the world. I’m really picky when it comes to magic systems and I happened to like how the magic system was in the first series, so the fact that that was all basically thrown out and replaced with the formulaic “words are power and are what drive power” idea is kind of irritating. It’s how most magic systems are in a lot of other YA fantasy, so I expect something different because I kept thinking about Eragon by Christopher Paolini the whole time. Now that is a magic system with words that works.

Since J.R.R. Tolkien wrote The Hobbit, I think it has become a cliche that fantasy writers feel like they have to have elves in their writing. 5 books written in the exact same universe before Vortex Visions and there is no mention of “elfin” until this book. I understand that the world has expanded and that we are still learning about it, but this feels a little forced and I’m not for it.

Characters:
Vi:
As far as main characters go, I found her…bland. She came off as the typical character that was separated from the life she should have lived with very little freedom. And of course, she likes to go out and hunt. How very original. I found her less individual and more like a watered-down version of her mother, Vhalla. It’s no wonder the Senate was unsure about her taking the throne seeing as she never set foot in their capital city, no one knew much about her, and her younger brother Romulin was living the life she essentially should have. I feel very little sympathy for her cause.

I think she did a lot of growing up throughout the book, though and I’m genuinely interested to see where the next book takes the rest of her journey.

Taavin:
He might have been my favourite part of the book. He was mysterious and intriguing, so I can’t wait to dig into his character more. Especially with how this one ended *wink wink*.

Andru:
Poor, beautiful, misunderstood Andru is too pure for this world and deserves to be showered with love and attention. He was made out as a bad guy almost the entire book, but he has so much more to him.

Last Thoughts:
I can’t lie, I liked Air Awakens far more than this and, for those of you that are reading this to decide where to start, I have to recommend you start there. This series can wait for you, but I also think, despite the deep flaws in this story, it is truly worth the read. There are enough characters that I care about, mainly from the original series, but a few in this as well, that I’m quite attached to and would like to see how they end up.