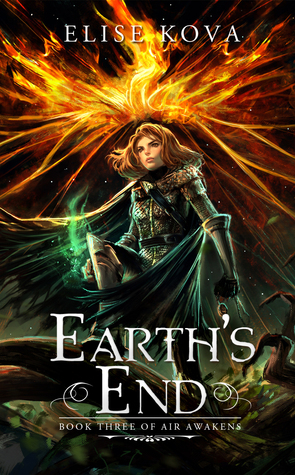 Vhalla Yarl has made it to the warfront in the North. Forged by blood and fire, she has steeled her heart for the final battle of the Solaris Empire’s conquest. The choices before Vhalla are no longer servitude or freedom, they are servitude or death. The stakes have never been higher as the Emperor maintains his iron grip on her fate, holding everything Vhalla still has left to lose in the balance.

Can we just take a minute to applaud Baldair on just being a genuinely amazing person? *soft clapping sounds in the distance* Lovely. I’m confident enough in my own ability to latch onto unsuspecting characters enough to be able to go out on a limb and say that he could possibly be my favourite character from this book. I know, I know, “But Price Aldrik is everything you love in a love interest, what has happened?!” Well, hear me out.

Alright, for starters, Aldrik legitimately creeped me the hell out. In Air Awakens and Fire Falling, it was like “Ooh dark prince, me likey”. And at the start of Earth’s End, this is much how I reacted. He was hurt, he needed Vhalla, and then his reaction to her absence when he woke up was just amazing and I freaking loved it. However, I don’t think Aldrik completely has his wits about. Not only does he essentially openly attack his father, but he does it in such a flamboyant and over-the-top fashion that it’s…unnerving. You know nothing good can come from that. Then, when he started snapping at Vhalla more and more about her “prying” I started getting those uneasy feelings that remind me of Tamlin from ACOTAR by Sarah J. Maas. He is unstable and not in the sexy way that the dark prince usually is, but like serious disturbed. When Vhalla finally allows herself to see his drinking problem, I think that solidified my resolve. The fact that she turned to Baldair in that situation speaks volumes to me. Not to mention he put off his own affairs to help her. Aldrik is like…clingy in a creepy way and throws around “my love” WAY too often for it to be smart. Just saying, uneasy vibes.

There’s two more books to this series, I knew this one couldn’t have a happy ending. The fact that Aldrik and Vhalla both thought they could get away with their…to avoid spoilers…plan for the end of the war was just ridiculous. They basically flaunted their plan and were asking for it to be dismantled. Once again, I turn to Aldrik’s unholy reaction. I don’t know what it is with people and just pushing their significant other away at inopportune times, but stop. The last 10 pages were probably the best part of the entire book just because of the sheer magnitude of everyone’s reactions. Not to mention it’s when Vhalla is the most badass because she basically says “Screw you” to everyone and just *poof* disappears.

I love this series and the fact that I’ve been dragging it out as long as I have is both amazing and terrifying. I do hope Aldrik cleans up his act, because I’m getting real tired of his bs while Baldair is out there being the golden boy (ha). His character alone and a few of Vhalla’s “WTF” moments are the only reason I couldn’t bring myself to give this a full 5 stars, but it was STUNNING nonetheless.