I hear a lot of talk about a lot of different shows and boy do I have my fair share. I don’t know if it reflects just how young I am or maybe I just haven’t connected with anything to this degree, but I’ve never been in a position where a show I’ve grown up with has come to an end. And I don’t mean a Disney or Nickelodeon show where yeah, you watch it occasionally, but when it ends you’re just like “oh, it’s over”, I mean one that matters and actually means something to you, personally. Whether it got you through a rough time or spoke to you on a deep level, helped you figure something out about yourself, or you just followed it for so long it’s just always been there for you. 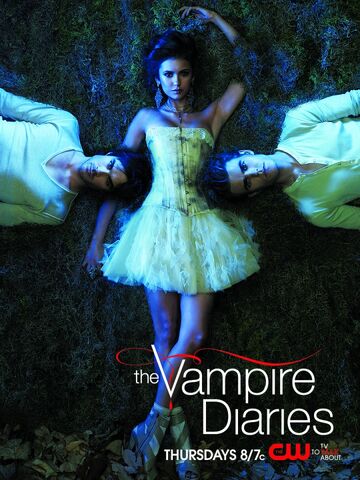 Friday, March 10, 2017, the last episode of The Vampire Diaries aired. Of course, many would merely shrug off such an occasion and many more wouldn’t think to post about it. “It’s just a TV show about vampires” is what many people I know would say and have said to me. But as a lover of books and one that obsesses about TV shows, when I feel a connection to a show or book series, I remember it. Forever. The Vampire Diaries holds a close spot in my heart and therefore, I think I should give it the closure it (and I) deserves. Back in probably 2012 or 2013, I got a Netflix account and started the art of binge-watching. When The Vampire Diaries popped up in my recommended tab, little did I know it would have an impact on me that would carry on for years and probably will for years to come.

As a teenager, of course I got caught up in the season one drama of vampires and high school. I fell in love with the show instantly. I could relate each character to someone I knew. Caroline was that bitchy friend that you had a love-hate relationship with. She was that one preppy cheerleader mean girl that you shied away from in the school hallways. Bonnie was the best friend, but the one you didn’t agree with all the time. The one where you would fight with one minute and laugh with the next. Elena was the girl everyone loved to love, well rounded, but somehow always in a tragic problem and found herself in the middle of everything. Stefan was that hot new guy that everyone loved to obsess and talk about, but he ended up not being interested in anyone (of course, not how the show ended up). Damon. Oh boy where do I start with Damon? He might not be like anyone I know but I could connect him to almost any book I’ve read. The bad boy. To a degree, I think I could relate with Damon the most, for better or worse.

I loved the raw intensity of the show. The pain was so real, something you could feel, even if you weren’t with them in Mystic Falls. While I didn’t like many of the characters (Bonnie, Caroline, and Matt), the ones I did love essentially became a part of me. I’m not afraid to say that there was a period of time where I shipped Stelena, but at some point I opened my eyes and realized that Delena was where it was all at. The passion, the fiery love, the emotion. It was at that point where my obsession for The Vampire Diaries truly solidified. Delena became my OTP and finally, in season four, my dream came true. With Elena’s turning, she finally realized her feelings for Damon. Yes, I know, sire bond and all, but I firmly believed that they were meant to be together and every time they got pushed away from one another, I died a little on the inside. Before I get into the last episode and the books I just want to take a minute to talk about how much I truly hate Katherine Pierce. A lot of people say that she’s the villain that everyone loves to hate, but I honestly just straight up hated her and I’ll stick by that. Especially now since there won’t be any more episodes and therefore no way to “fix” everything she’s done to not only Stefan and Damon, but the entire cast. While on the subject of characters I hate, after Bonnie got linked to Elena’s life, essentially anything I felt for her meant nothing. I just wanted Damon and Elena together again and that was all that mattered to me, I didn’t care if that meant Bonnie was going to die.

This is starting to get long and I’m rambling because I’m distraught over the last episode, so I’ll try and keep this somewhat short and sweet from now on. The ending killed me. Katherine and Damon got the reunion that should have been for Damon and Elena, so when they were reunited it seemed forced and upsetting. I didn’t get enough of Delena. I wanted to see them old or with children, or at least looking somewhat happen, but they both looked pretty solemn when they were together. In no universe should a TV show called The Vampire Diaries end with there being one vampire left on the entire show.

I get it. They ended it in a way where everyone got closure, but I’ll always want more. They can’t make everyone happy, I just wanted something more. I know a lot of people won’t care about this, but I really love being a part of the TVD Family and I’ll remember it forever (and me crying for about an hour during and after makes that pretty obvious).

Now, for anyone that has ever read the books, they know that little to nothing from them was moved over to the TV show. For starters, Elena is supposed to have blonde hair and have blue eyes. Damon and Stefan are supposed to be 500 years old and short (and Italian). Bonnie is supposed to have red hair. There’s so much different that I actually can’t remember what all is different. But it is a good book series if you separate your ideals of both the series and the show. I truly recommend it and hey, since the show is over, maybe give the books a try?