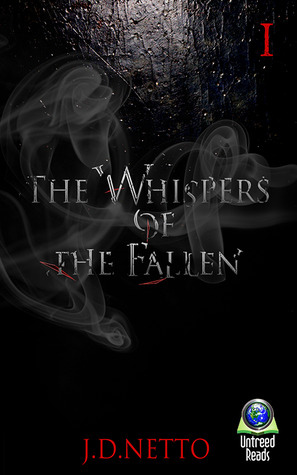 I received a copy of this book in exchange for an honest review.

Isaac and Demetre are simple farm boys. They help their village and their parents on a daily basis, harvesting, planting, and anything they can do to help. Until one day when they both wake up to find their parents missing. Turns out that their parents are a part of a group of people that protect a diary. A diary written by the devil. Their lives go from simple to complicated and in a work with angels and demons, no one is really safe.

I followed the author J.D. Netto on Instagram long before I read this. First off, the covers look amazing, the idea sounds unique (an angel book told in the POV of a guy…RARE!), and I felt a pull to it. It started off well enough, but I started noticing a few things that just bothered me and as I progressed through the story, it kept nagging at me and I found more and more small little problems. It began to take away from the story.

Warning: This will probably have spoilers, so if you don’t want to see that, look away now.

1. The very first thing I noticed in the dialogue is the severe lack of contractions.
These boys are farmers, they aren’t royalty or poised in any way, they should know a contraction or two. In my mind, the lack of contractions leads to the voice sounding bland and mechanical. It sounded stiff and awkward. The more I thought about it, the more I noticed it happening. For example: “What is wrong?”. Now, I might be able to accept this if it was an exclamation, but in normal conversation, I would think someone with Isaac’s background would say “What’s wrong?” or “What happened?”. Another example: “‘It does not look so bad,’ I said in a cheerful tone”. It sounds too formal for a farm boy and happened consistently throughout the novel.

2. The use of “us” and “our” for things that Isaac alone knows he’s feeling.
This one isn’t that big of a deal. It’s mainly me focusing on the smallest, most pointless detail ever, but it bothered me for some reason. I can’t find an example straight from the text, because I forgot to bookmark one, but there was a time when Issac said something along the lines of “It made us feel safe” or “It unsettled us both” in times where they never talked to each other about their feelings and Isaac couldn’t possibly know that Demetre felt that way. Like I said, though, just me nitpicking.

3. The use of “now” and “this”.
I don’t even know if this is technically grammatically incorrect, but in a past tense book, I don’t expect to see this. For example: “I had never heard of the Kingdom of Mag Mell, but right now the only thing that concerned by was leaving”. By saying ‘right now’, to me it indicates that it’s really happening right now, not in the past, so I don’t think that fits. I forgot to mark an example for ‘this’ as well, but it’s something like “This tower is tall and obviously showed it’s age”. That’s an awful example, but it’s the best I could think up. It makes me think the narrator is literally looking at the tower, not looking back on it. As a bonus for this, I also found a part that used ‘these’ in a place I didn’t think fit. “I suppose they were paying tribute to these two beings”. I don’t know if this is technically incorrect either, but maybe if ‘these’ was replaced with ‘the’ instead it would make more sense.

4. The characters are emotionless and flat.
Issac’s life is literally thrown away and he gets all this information thrown at him, but he just doesn’t care and he goes along with it. If I was put in that situation, I would ask a few more questions, not just blindly throw trust to people I don’t know! At some point, Demetre gets killed and Isaac watches completely stone-faced as his best childhood friend gets murdered. No tears, no emotion, just nothing. How awful is that?

I wanted to like this book, really I did, but even without the grammatical stuff that I was overly focused on, the story just lacked the kind of emotion and adventure that I need in a book like this. There was too much description for little things and too little description and explanation for things I really wanted to know about. The character’s flatness just caused me to not care about any of them. When Demetre died, I felt nothing, because there was nothing to feel, we never get an emotional connection to the characters and in books, that’s very important.